Discard your cares and take a break amongst elegant surroundings. Historic hotels create a one-of-kind ambiance where guests can relive a bygone era. These west coast hotels provide a retreat from the ordinary.

Perched above the beach, “The Pink Lady of La Jolla” is a San Diego landmark. Built in 1929, the La Valencia has tropical gardens, sunny courtyards, and a pool with a Pacific ocean view. Musicians perform live on the patio every Thursday through Sunday.

Relax in the lobby bar—La Sala. Sip on a Pink Lady or Manhattan while sitting under the hand-painted cathedral-like ceiling. It’s easy to picture the actors from Hollywood’s Golden Age chatting in this bar. Many of them could also be seen honing their craft at the La Jolla Playhouse—a theater conceived by Gregory Peck that still draws the crowds.

Rooms were renovated in 2021 and several are ADA compliant with either a roll-in shower or bathtub/shower combo and grab bars. The deluxe king or queen/queen has close to 400 square feet. The vineyard suite king features a sitting area with a double sofa sleeper. The open floor plan of the mission suite king is enhanced with a cozy wood-burning fireplace. The largest accessible accommodation, General Vallejo suite, has more than 1,000 square feet, a separate living area, an extra large patio, and king bed. 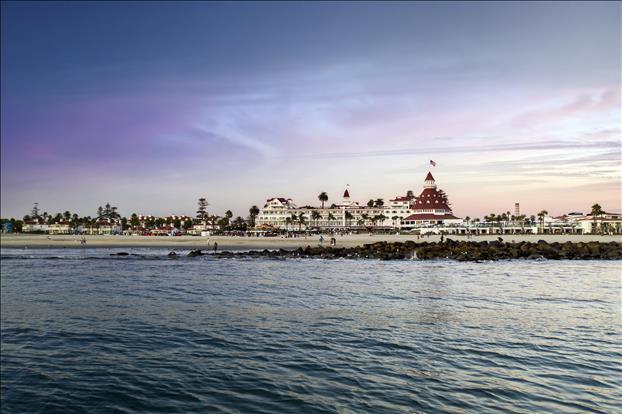 Rated by USA Today as one of the top ten hotels in the world, the Hotel del Coronado is a divine SoCal property with 130 years of history. The hotel’s Victorian Queen Anne architecture and sun-drenched beach served as the backdrop to the 1958 comedy film, “Some Like It Hot,” starring Marilyn Monroe, Jack Lemmon, and Tony Curtis.

Today’s guests still appreciate the iconic turret and signature red roof. Have cocktails at the distinctive Babcock & Story Bar. The centerpiece is a 46-foot mahogany bar originally installed in 1888.

While the architecture is from a bygone day, the resort amenities speak to a new generation. Unwind on the beach, beside the pool, at the spa, or the Fitness Center. Try the complimentary yoga on the beach class or rent a bike and explore a nearby bay or beach trail. Pamper yourself with a little retail therapy at one of several shops throughout the property. Pick up a signature Hotel del Coronado painted holiday ornament as a souvenir.

The hotel offers a variety of accessible guest room options with features that range from private balconies and fire pits to ocean views and a sofa bed. Additional in-room amenities include 300 thread count sheets, Keurig coffee maker, and a mini fridge.

Reminiscent of boutique European hotels, the charming Ashland Springs Hotel provides an oasis of comfort in this mountain town. Built in 1925, the property’s architecture is Gothic mixed with Beaux-Arts.

The 70-room hotel has an accessible queen/queen guest room with crisp linens, goose down blankets, and French style quilts. WiFi, a continental breakfast, and in-room coffee are complimentary.

Coordinate your visit to coincide with the Oregon Shakespeare Festival (OSF). One of the country's oldest and largest professional non-profit theaters, the OSF stages ten shows each season in three theaters. The accessible OSF is less than a five minute walk from the Ashland Springs Hotel. The festival conducts sign language interpreted performances on select days. 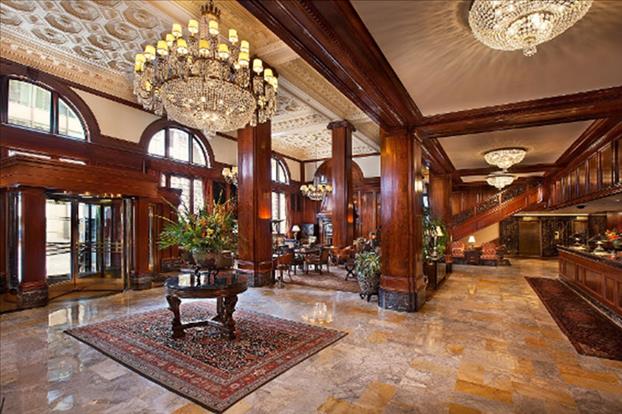 Designed to attract high end clientele, one of the state’s most iconic hotels opened in 1913. The Benson’s opulent lobby dazzles visitors with Italian marble floors, Austrian crystal chandeliers, pillars and walls made of Circassian walnut wood from Russia, and classical coffered ceilings. The downtown property has played host to nearly every U.S. president since William H. Taft.

Recently renovated, the hotel offers three types of modern accessible guest rooms. Each has a roll-in shower with grab bars and Tempur-Pedic beds with ottomans. Choose between either a queen or a king accessible suite. Both are approximately 350 square feet and include a sitting room with a sofa sleeper. For a splurge, select the accessible presidential suite with a king bed, separate living area, sofa sleeper, a wet bar, and a dining table for four. All of the guest rooms provide Gilchrist & Soames bath amenities, complimentary Starbucks coffee and tea, work desks, and organic robes.

The Historic Davenport in downtown Spokane opened in 1914. The hotel’s fireplace burns year round—guests gather around the gold leaf hearth and are transported to another time in the stunning lobby with ornate woodwork, hand-painted frescoes, and a skylight.

Relax with sophisticated cocktails on the Roof Garden Terrace Bar (open seasonally) or at the Peacock Room Lounge under a colorful stained glass ceiling. Dine at the Palm Court Grill—where the signature dish is the Crab Louis salad—a recipe created by the hotel’s chef more than a century ago. To learn more about the hotel, ask the front desk for the self-guided walking tour.

The hotel offers ADA rooms with roll-in showers in marble bathrooms. Choose from two queen beds or a king. A rollaway bed is available for an additional fee.

Editor’s Note: Due to historic preservation, some areas of these hotels may not be completely accessible. For example, a spa might be located on a level that can only be reached by using stairs. To avoid disappointment, always confirm the specific features you wish to use are accessible.
Learn about our venue selection process and accessibility.