Waterslides, bubbling fountains and a thrilling boat ride are making this summer a little more splashy for some people with disabilities. All of this and more can be experienced at the nation’s first completely accessible water park, Morgan’s Inspiration Island in San Antonio, Texas. The park is filled with shallow pools and several large splash pads, all with different tropical themes. There is even a warm-water splash pad for those who do not like cold water, and a splash pad that plays music. A five-minute long accessible boat ride twists and turns through a tropical forest. In addition to the attractions, there are relaxing cabanas for lounging and venues selling food and souvenirs.

Morgan's Wonderland and Morgan's Inspiration Island
Be the first to review!

Morgan's Wonderland and Morgan's Inspiration Island
Be the first to review!

Be the first to review!

Thanks for adding to the community! Your review is pending approval.
You can see your reviews on accessibleGO by visiting your account settings. 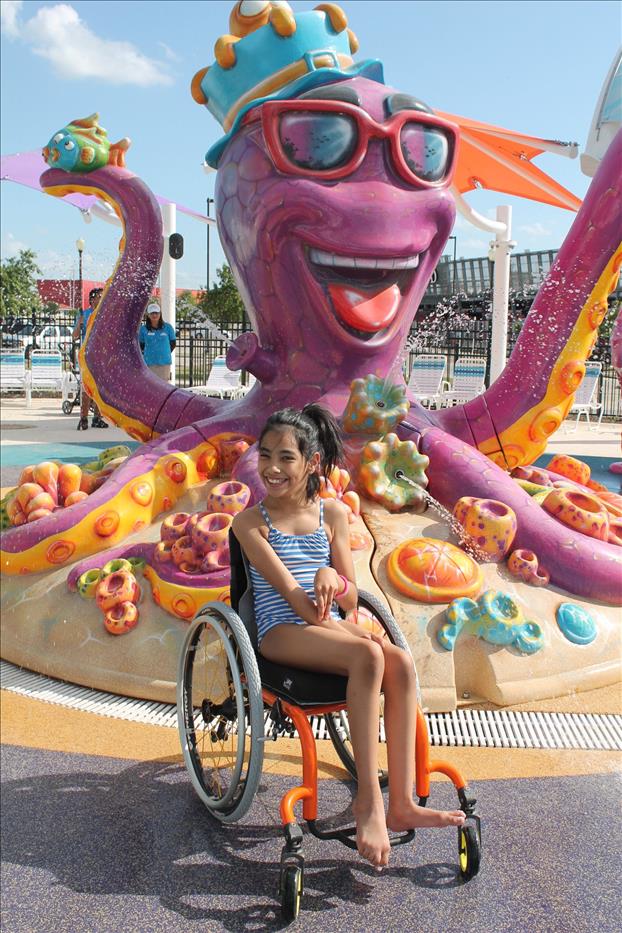 “This is inclusion in action,” said Gordon Hartman, CEO of The Gordon Hartman Family Foundation, which developed and operates Morgan’s Inspiration Island along with the adjacent Morgan’s Wonderland, an accessible amusement park that opened in 2010. Because both parks are fully accessible, those with disabilities and those without can easily share in the experience.

“We need such places to remove barriers and to engender better understanding between those with and without disabilities and special needs,” said Hartman, who was inspired to build both parks by his 23-year-old daughter, Morgan, who has cognitive and physical disabilities.

“Morgan truly has been the catalyst for every project we’ve pursued to help the special-needs community,” he said. Before building Morgan’s Wonderland, Hartman traveled across the country searching for accessible theme parks, but did not find any that were fully inclusive to those with and without disabilities.

“During our travels, we noticed that the vast majority of facilities serving special-needs individuals tended to be in obscure locations, out of sight and thus out of mind,” he said. That’s why they decided to build Morgan’s at the intersection of two major highways in San Antonio and market it as a place for everyone. The foundation put in additional years of work and research to develop the new water park.

“We called on doctors, therapists, special-ed teachers, parents of children with special needs and caregivers, to name a few. We took their ideas and then worked with various experts and suppliers in the water-park industry to transform dreams into the reality that is now Morgan’s Inspiration Island,” he said. 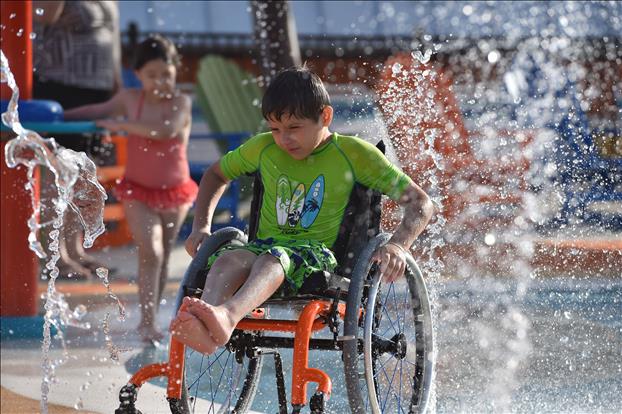 Morgan’s goes out of its way to make sure guests have a fun and comfortable visit, with the park providing waterproof wheelchairs and strollers in case people are worried about damaging their own, although visitors can use their own wheelchairs and other assistive devices if they wish. Anyone with a disability is also admitted for free, ensuring that the place is truly inclusive.

The two parks together cost more than $50 million to design and build, and are operated on a not-for-profit basis.

While Morgan’s Inspiration Island and Wonderland stand out as a one-of-a-kind vacation destination, there are a growing number of smaller parks and playgrounds in public places around the country offering inclusive equipment and activities. At these places, children (and adults) of all abilities can play together: 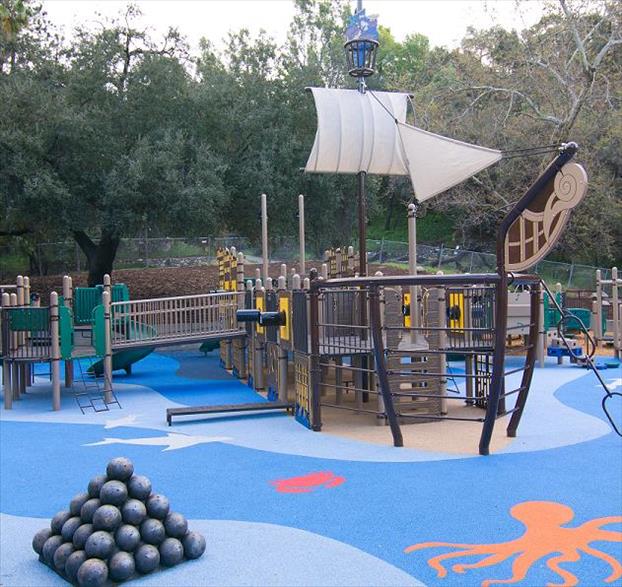 Reese’s Retreat At Brookside Park in Pasadena, Cal., is a pirate-themed play space that stretches over half an acre, and has accessible equipment in addition to areas where children can play in sand and water.

Universal Playground at Fairmount Park in Riverside, California, is a brightly-colored circus-themed playground with accessible swings, climbing areas and merry-go-rounds. There is large accessible splash park and sand-play area.

Helen Diller Playground in San Francisco’s Mission Dolores Park features a 45-foot-long accessible slide as well as swings and giant musical instruments, including drums and a xylophone. There are raised play tables filled with sand and water. 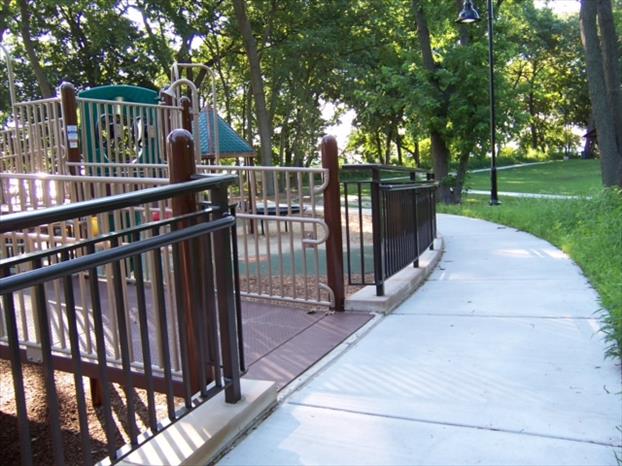 Noah’s Playground for Everyone in Evanston, Illinois, has play equipment as well as raised sandboxes and musical instruments. The use of bright colors and textured building materials also makes this park easier to navigate for those who are blind or have low vision.

Millstone Creek Park in Westerville, Ohio has accessible playground equipment like slides, swings and climbing areas as well as a sensory-engaging electronic play area, featuring large interactive screens and a variety of games. The park is surrounded by an area of natural wetlands accessible by a series of ramps.

Variety Wonderland Playground in Forest Park in St. Louis, Missouri., offers swings and other wheelchair-accessible playground equipment. Small details, like slides with tall edges and spongy material covering the ground add an extra layer of security against falls. There is also a fountain to splash in and a shaded pavilion.

Taylor’s Dream Boundless Playground at Kreager Park in Fort Wayne, Indiana, has three sections of accessible playground equipment plus a water-play and splash pad area in addition to picnic shelters. 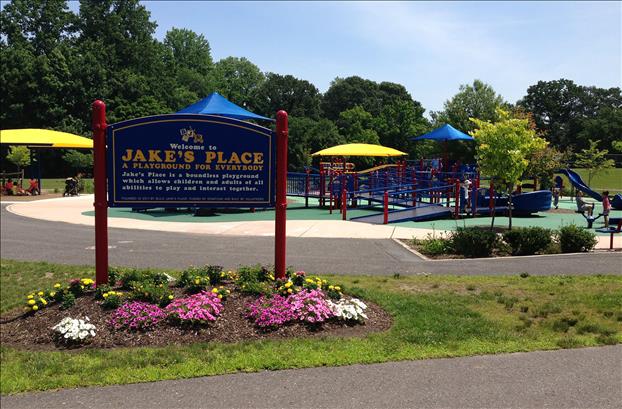 JT’s Grommet Island Park in Virginia Beach, Virginia, is an inclusive playground with swings, slides and climbing equipment located on the beach. It includes raised tables for building sand castles and sensory boards for those who are blind or have low vision. There are also sculptures and a sand-scoop designed to be operated by someone in a wheelchair.

ClemyJontri Park in Fairfax County, Virginia, has several inclusive playground structures connected by ramps. Low monkey bars are easily reachable, and no-slip rubber surfaces are easy for wheelchairs to maneuver.   The park also features a wheelchair accessible carousel and picnic shelters and tents that can be rented for events.

Hope Park at Frisco Commons Park in Frisco, Texas, has a large play area complete with accessible slides, swings and musical instruments. The park is also the topic of the children’s book, One Park for All, by Kristan Olfers and Karen Dodson, which tells the story of how a little girl and her mother helped build an inclusive playground in their town.

Signal Centers Playground in Chattanooga, Tennessee, combines playground equipment with a natural landscape to cater to visitors of all ages and abilities. In addition to accessible slides, swings and climbing areas, there is a raised sand table.

Everybody’s Treehouse at Riverdale Park in Germantown, Tennessee, offers an inclusive play area, with swings, slides and other playground equipment as well as an accessible tree house. Planned additions include an accessible outdoor classroom and gardening space.