Orlando is the most popular tourist destination in the United States, and is full of magical experiences. Its multiple theme parks, including Disney World and Universal Studios, but also the lesser-known LegoLand and GatorLand, are great for families and people of all ages. But there are also plenty of activities outside the all-consuming world of theme parks, including a new observation wheel, a botanical garden, and scientific adventures offered at The Orlando Science Center and a bit further afield at Cape Canaveral’s Kennedy Space Center. Because it is a relatively new city and very suburban, many of its sites and activities are easily accessible to people with disabilities. 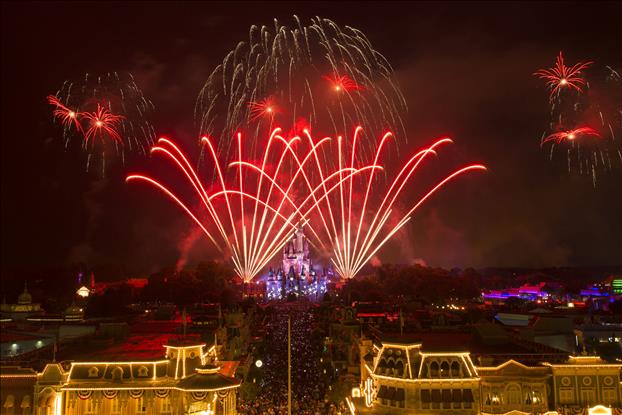 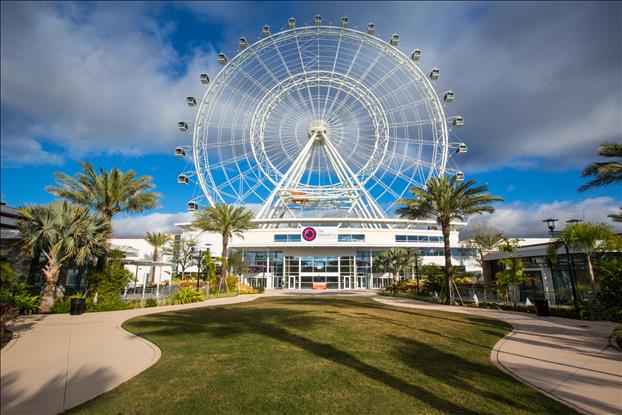 Ride the Orlando Eye, a 400-foot tall observation wheel on downtown Orlando’s International Drive, that gives you a bird’s-eye view of the city, including its theme parks and also numerous lakes and green areas.

The Eye, part of the new iDrive360 complex, is reachable by the wheelchair accessible I-Ride Trolley, or visitors with vehicles can park in the complex’s garage, which offers accessible parking and free valet parking.

The Eye is fully-wheelchair accessible, and also allows riders to bring along necessary oxygen tanks and service animals. After riding the wheel, stroll around International Drive, where you will find numerous shops and restaurants to grab a quick lunch.
Noon
Noon 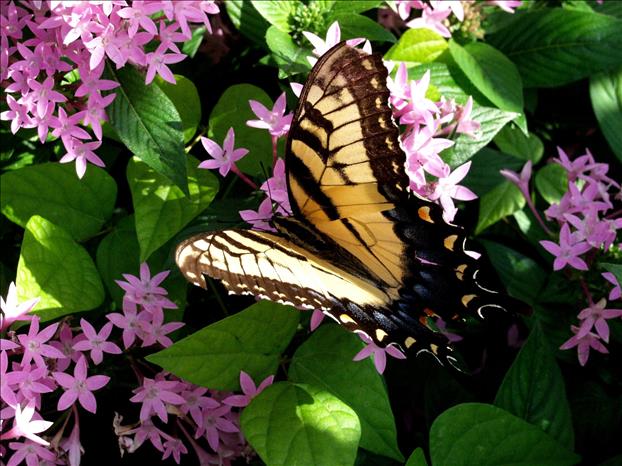 Visit Harry P Leu Gardens, which contains 50 acres of mainly tropical plants as well as accessible meandering walkways. The garden also has a reputation for encouraging gardening among those with disabilities; this can be seen in the Abilities Garden here, which features raised areas of grass and planting beds that wheelchair users can easily transfer to.
4 p.m.
4 p.m. 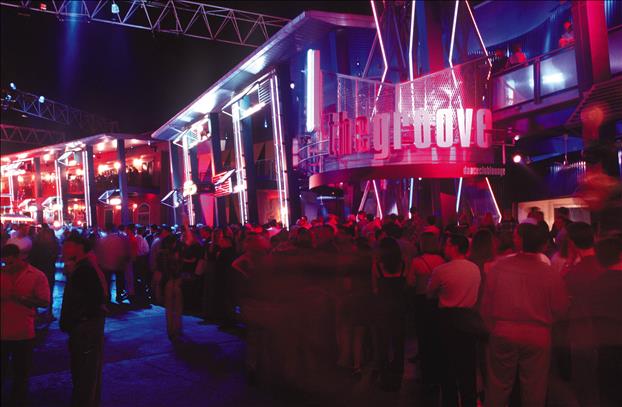 The Groove at CityWalk. An electrifying nightclub that features next generation sound and an array of lights and visual effects. | Visit Orlando

Head for CityWalk at Universal Studios to enjoy dinner as well as soak up some of the atmosphere of the theme park based around a working movie and television studio. There is no admission fee for City Walk, a pedestrian area featuring restaurants, bars, nightclubs and other entertainment options, such as a bowling alley and a 19-screen IMAX theater.

Parking is in the main Universal Studios enclosed garage, where accessible parking is available and wheelchairs can be rented. It is about a 15-minute walk to CityWalk from the main parking area. Or, valet parking will leave you just a few-minutes walk from the CityWalk entrance.

But the best bet is to try to take a shuttle or bus from your hotel, many of which meet accessibility standards; this way you will not have to worry about parking. You can find many fun and themed eateries that are also wheelchair accessible at CityWalk, such as Jimmy Buffet’s Margaritaville, NBC Sports Grill and the Hard Rock Cafe.
7.p.m.
7.p.m. 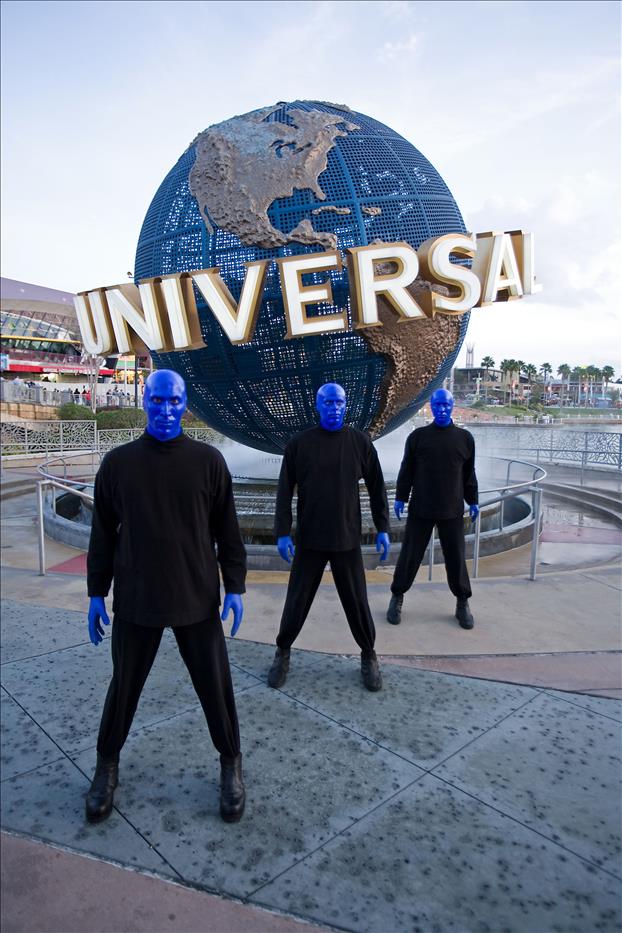 After dinner, take in a show by Blue Man Group, an eclectic stage performance with elements of theater, comedy and a rock concert, at The CityWalk theater. There is wheelchair-accessible seating scattered throughout the venue, as well as assistive listening and descriptive narration devices for those who are blind, have low vision, or are deaf or hard of hearing. 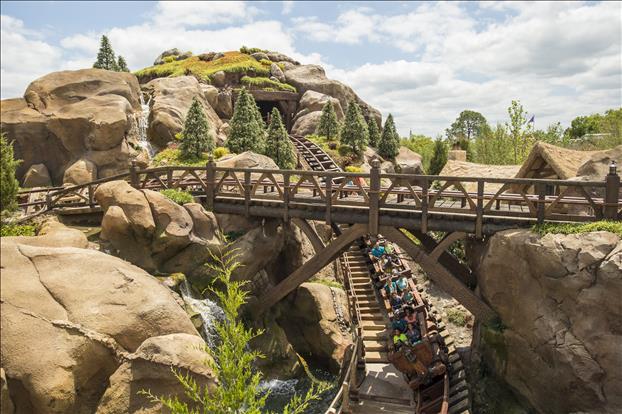 Walt Disney World Resort completed a multiyear project in May 2014 that doubled the size of Fantasyland with the debut of Seven Dwarfs Mine Train, a family-friendly coaster which takes guests on a wild journey through the mine “where a million diamonds shine.” | Visit Orlando

Set out for Disney World’s Magic Kingdom after a quick breakfast at your hotel. Fun for adults and children alike, it is possible to experience a lot of it in just one day, and it offers a variety of activities, from thrilling adventure rides, to more gentle rides, to meeting Disney characters to watching performances and parades, along with unique and whimsical dining experiences.

Grab a map of the Magic Kingdom and pick out what rides and attractions you want to see. This guide describes how each attraction caters to guests with disabilities and outlines the park’s extensive services, including parking and transportation options.
12 p.m
12 p.m
Take a break for a meal with entertainment at Be Our Guest, which features an atmosphere and characters out of the Disney movie Beauty and the Beast. This restaurant, and most other themed dining experiences can accommodate guests with disabilities, but making a reservation is recommended.
3 p.m.
3 p.m. 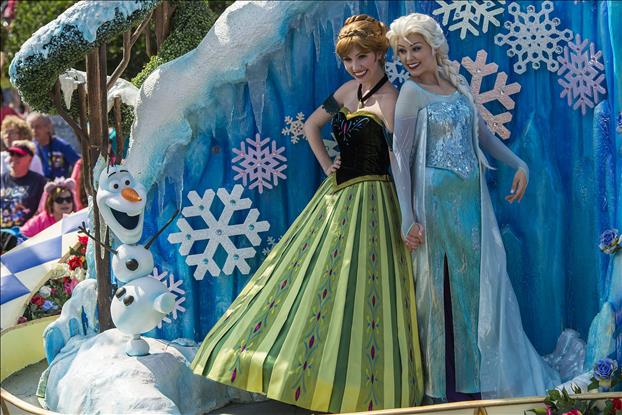 Watch the Festival of Fantasy Parade which includes whimsical floats and music, and stars various famous characters, including Cinderella, Sebastian from The Little Mermaid and Captain Hook from Peter Pan. There are designated areas for wheelchair-users along the route, and some locations also offer sign language interpretation.
7 p.m.
7 p.m. 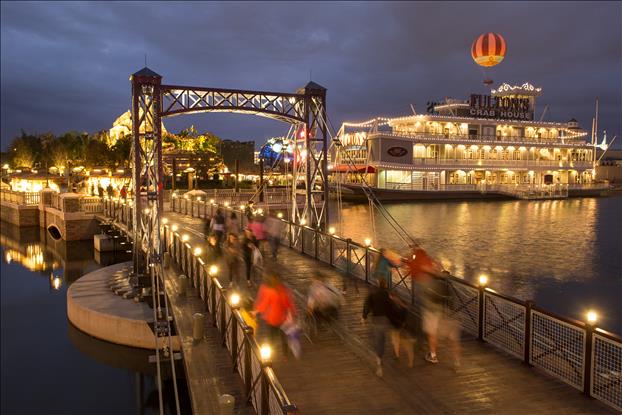 The new Village Causeway at Disney Springs provides guests with another path of travel through the Marketplace. | Photo: David Roark

Visit Disney Springs, an outdoor dining, shopping and entertainment area that is free to enter and is open until midnight. It often hosts concerts at the House of Blues and other venues. It can be reached from the Magic Kingdom using the accessible Disney bus system, which you can pick up at the nearby Contemporary Resort. Or, from the Magic Kingdom you can take the accessible monorail to any Disney Resort, then catch an accessible bus from there to Disney Springs.

Top Tip: The best way to see the Magic Kingdom is to arrive early, even before the park opens at 9 a.m. in order to get a head start on the lines and crowds, especially if it is the high tourist season. This will also allow you time to register for Disability Access Service or rent a wheelchair near the park entrance if needed.
Getting Around
Getting Around
From Orlando International Airport, you can take the complimentary Magical Express coach, which is wheelchair accessible, if you are a guest at any Disney World hotel.

To get around Orlando and the local theme parks, there is the accessible I-Ride Trolley around downtown, as well as the Lynx bus system, which provides accessible transportation and as well as provides complementary paratransit services.

Due to its suburban nature and tourism infrastructure, most places in Orlando abound with parking options for those who are driving, including accessible parking for vans.
Learn about our venue selection process and accessibility.