When it comes to exploring the sprawling city of Los Angeles, it can be tempting to want to pack in everything, from the vibrant beach culture to star-studded Hollywood to Disneyland.  That is usually not possible, at least not without a helicopter to avoid the snarling traffic jams.  But when choices are made, the so called City of Angels, a name derived from that of a nearby river when the area was first encountered by European explorers in the 17th century, can still be a heavenly place to explore, even if time is limited.

If you have just two days, we recommend that you concentrate on the beaches, the emerging downtown art scene and the historic streets and landmarks of Hollywood.  You will see that because of the creativity that seems to infuse every part of life here, these places will provide the very thrills you may be afraid you are missing by skipping out on the theme parks, at least for this visit. 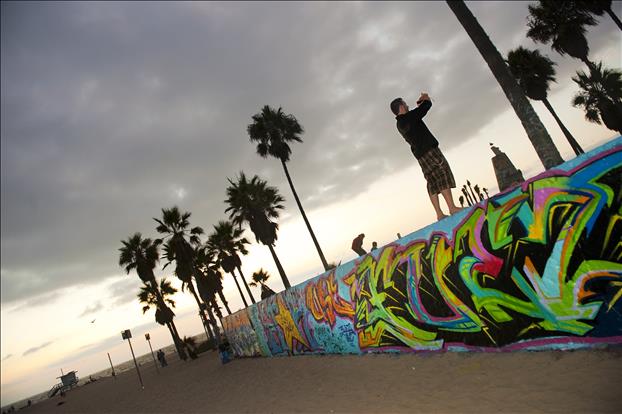 To start your visit with the excitement and sunshine Los Angeles is famous for, head out to the eclectic Venice Beach.  In the still-quiet morning air, enjoy brunch at James’ Beach, just steps from the Pacific Ocean.  A favorite among locals for more than two decades, this casual  and wheelchair accessible eatery offers patio seating and sweet treats like blueberry ricotta pancakes alongside more savory options, like eggs florentine with smoked salmon and creamy hollandaise sauce.  Then join the sunbathers on the wide stretch of beach, taking in the surfers and the sound of the waves crashing onto the sand.

A walk along the flat paved boardwalk will be full of street performers, skateboarders and ice cream stores, along with the iconic outdoor gym known as Muscle Beach.  For a taste of Italy, don’t miss the Venice Canals, the waterways  built by developer Abbot Kinney at the beginning of the 20th century, which run between some of the area’s most unique historic homes, whose yards are docks for their rowboats and canoes.  The bridges over the canals are often narrow and steep, but a simple drive or walk through the area is enough to give you a taste of this interesting neighborhood. 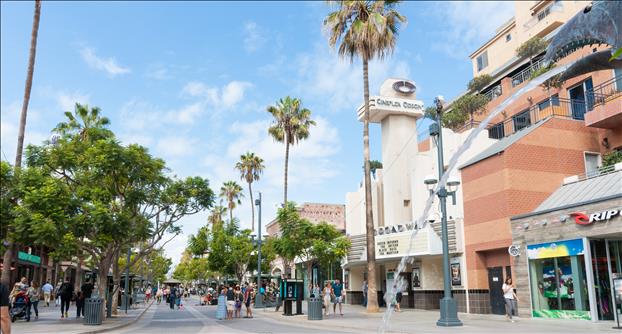 Hop on a bus or make your way by bicycle or foot along the two-mile paved path to Santa Monica.  Just a few blocks east of the beach, you will find Santa Monica’s Third Street Promenade, a lively wheelchair-accessible pedestrian area of boutiques and restaurants.  This will put you in the heart of the luxury and materialism L.A. is famous for; but the bookshops and antique stores will also give you a glimpse of the creative and artsy side of the city.

Sit down for lunch at the wheelchair accessible and casual Fritto Misto Italian Cafe, where you can create your own pasta dish, choosing from ingredients like fresh artichokes, capers and sautéed shrimp.  Make sure to leave room for the flourless chocolate cake and other homemade desserts. 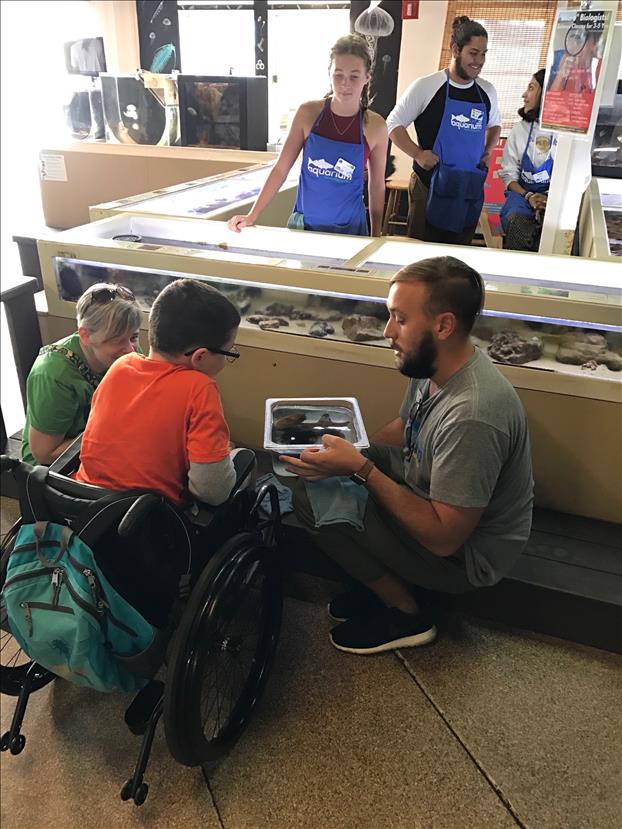 Stroll the historic and fun-filled Santa Monica Pier that juts out into the Pacific Ocean, taking in the mix of the classic amusement park rides, coastal views and the lively street performers ready to wow you with juggling, acrobatics or the strums of a guitar.

Some areas of the pier are made from wooden planks, which makes for slow-going for those in wheelchairs, but most of the pier is smooth and paved.

Pay a visit to the Heal the Bay Aquarium, reached by a ramp just under the pier’s carousel building.  This hidden gem gives you underwater views and contains more than 100 marine animals, all of which live in the surrounding Santa Monica Bay. 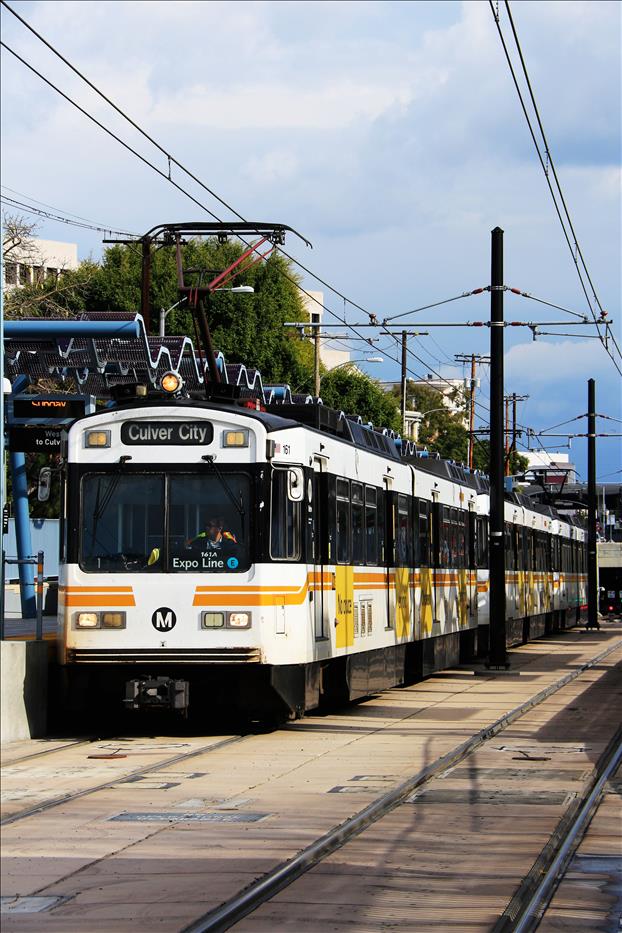 Head into downtown Los Angeles, which can now be reached from Santa Monica on the newly-expanded Expo Line of the light rail train; like all of the city’s public transport system, it is wheelchair accessible. Downtown is currently undergoing a sort of arts and culture renaissance, with a hub of new museums and entertainment venues beginning to form a core in this city that has long been criticized for lacking a center. 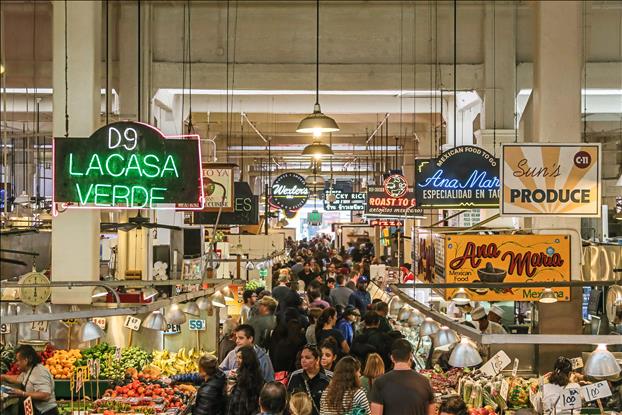 Crowds flock to the Grand Central Market in downtown Los Angeles to shop for groceries and eat lunch at the popular marketplace.

One place where you can see this shift in progress is at the city’s Grand Central Market, where you can also grab a quick dinner. The market is wheelchair accessible and equipped with elevators and accessible restrooms. Founded a century ago by immigrants from Germany and Italy and later joined by those from Korea and Mexico, this sprawling market full of fresh produce and eateries has recently emerged as one of L.A.’s trendiest food scenes.

To get a taste of the twists on the classics that are so prevalent now on L.A.’s fusion dining scene, try the orange falafel at Madcapra, which adds carrots into the traditional chickpea-based batter that is fried to create this crispy Middle Eastern staple.  For your beverage, try Madcapra’s iced cardamom tea or the sumac-beet soda. 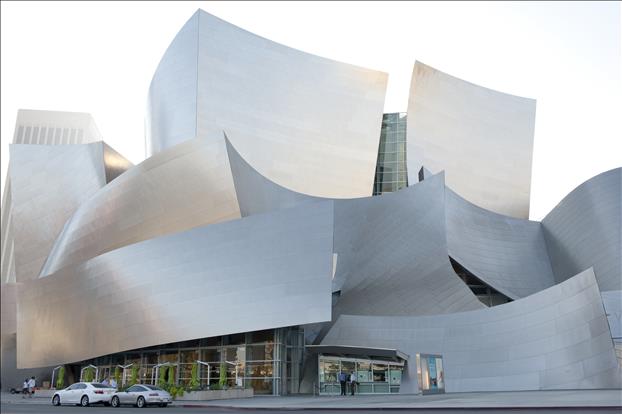 Cap off your evening with a performance at The Walt Disney Concert Hall, which encapsulates the unique and creative spirit of Los Angeles.  Designed by Frank Gehry in 2003, the building’s mangled stainless steel exterior alone makes it worth a visit.  Step inside to see a performance of the L.A. Philharmonic, which is based here, or a performance by a visiting group, and you will find that its hardwood paneled interior makes for some of the best acoustics in the world.  There are wheelchair accessible seating areas, assistive listening devices and large-print brochures available. 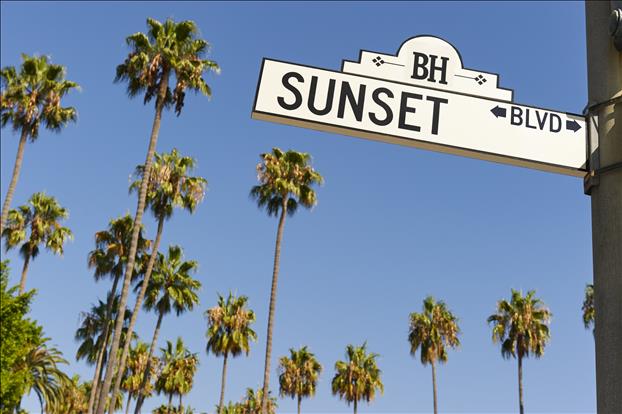 To get a glimpse of what’s behind the street names you will recognize from the movies, start your day in Hollywood, the neighborhood defined by Melrose, Sunset and Hollywood boulevards.  Eat breakfast at Cheebo on Sunset Boulevard, where classic diner food meets trendy organic.  Rather than hash browns, try a side of quinoa with your made-to-order eggs.

Featured in dozens of movies, including “Sunset Boulevard” and “Almost Famous,” Sunset Boulevard is a strip crowded with restaurants and high end shops that serves as a thoroughfare between the television studios and the homes of the stars up in the Hollywood Hills; it’s a place where you want to see and be seen.  Although many of the movie studios have migrated to Burbank, with Paramount being the only major studio still in Hollywood, there are still many television studios along Sunset and in the surrounding area.  The area offers wide sidewalks and curb-cuts. 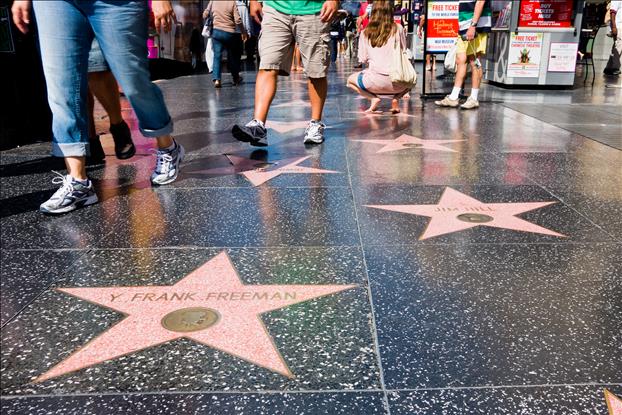 Celebrity stars on the Hollywood Walk of Fame. Located on Hollywood Boulevard, there are more than 2400 celebrity stars made from marble and brass. The stars are permanent public monuments to achievement in the entertainment industry, bearing the names of a mix of actors, musicians, directors, producers, musical and theatrical groups, fictional characters, and others.

Explore Hollywood Boulevard, a place studded with stars. Originally founded as its own city, Hollywood voted to merge into Los Angeles in 1910, just as the motion picture industry was born.  While much of the film industry has moved out, area is a great place to explore the history of this storied industry and witness the gentrification that is in many ways a defining current feature of Los Angeles.  Look down at the ground as you wander the Walk of Fame to see metal stars engraved with the names of most every celebrity you have ever heard of.  The sidewalk is wide, smooth and has curb cuts. 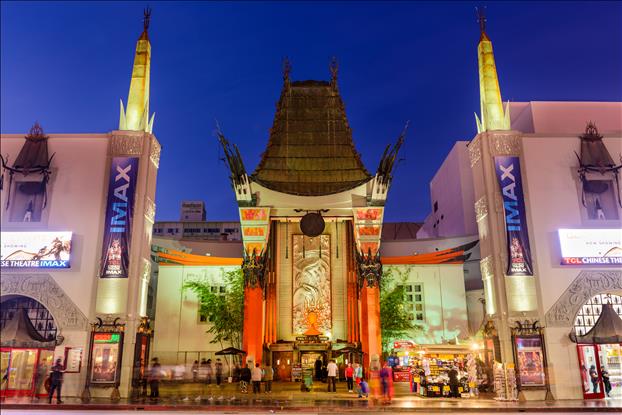 Crowds gather at Grauman's Chinese Theater on Hollywood Boulevard. The landmark theater has hosted numerous premieres and award ceremonies since it opened in 1927.

Enter Hollywood and Highland Center, where you can have a late lunch at one of the numerous restaurants and check out the architecture and decor of the TCL Chinese Theater, long known as Grauman’s Chinese Theater.  Here, at the world’s most famous movie theater, you can join a 30-minute tour. Boasting one of the world’s largest IMAX screens, the theater is also the venue of many red carpet premier viewing events for those in the TV and film industry.  You can check out the handprints and footprints of many of Hollywood’s past and current starts in the courtyard of the theater.  The center is wheelchair accessible.

The Wax Museum on Hollywood Blvd in Los Angeles.

Continue to make your way along the wide sidewalks of Hollywood Boulevard, and pop into the Hollywood Wax Museum, the oldest of its kind in the United States, to see dozens of stars immortalized in wax.  And don’t miss the historic Egyptian Theater, boasting architecture inspired by the Nile and the pyramids, and offering tours that highlight the workings of an old-time stage show of the 1920s.  These and most other attractions along the boulevard are wheelchair accessible. 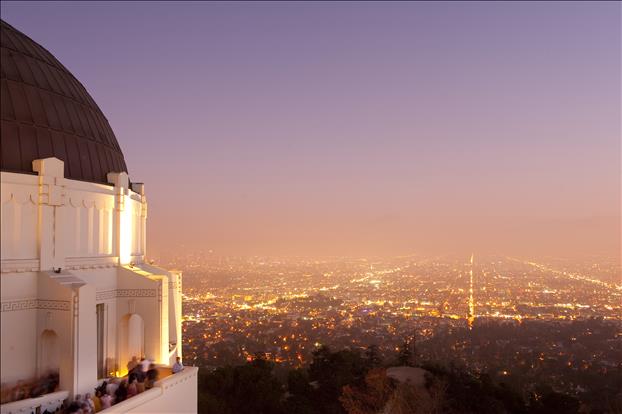 For some night sky stargazing, visit Griffith Observatory, perched on a hill offering excellent views of the famous white letters spelling out Hollywood on a nearby hillside, in addition to peering through telescopes, viewing exhibits and catching a live show at the planetarium.  The landscaped grounds of the observatory are also filled with paved paths, making this park a peaceful place to explore and reflect on your short time in Los Angeles.

The entire complex and grounds are wheelchair accessible. Assistive listening devices are available for most shows and presentations, and  films have captioning upon request.  The observatory will make additional arrangements to accommodate guests with disabilities; call (213) 473-0800.

Residence Inn LA Live offers both long- and short-term stays and is located in the heart of city’s entertainment district, close to several stadiums and the convention center.  The hotel’s accessible rooms have 32-inch wide doorways, and all of the hotel’s public spaces are accessible.  The pool is equipped with self-operating lifts and sloped entry.  There is accessible parking